Few things drive me crazier than the jargon-loaded, meaningless, bloated language I see used in far too much so-called "thought leadership" content. Let’s be honest: Much of it is impenetrable dreck, unreadable to the point of being offensive.

I swear, sometimes it’s almost like many would-be thought leaders hope no one will read their content. They don't want to risk making a controversial statement, a prediction that might prove wrong later, or to otherwise raise eyebrows back at the corporate office.

Frankly, many execs and SMEs are more worried about what their boss or board thinks of their content than whether their target audience will actually want to read it. The bloated language serves as a fig leaf to protect the writer rather than a tool to help the reader.

Brands succeed by standing out—but too many aspiring thought leaders are more concerned with fitting in.

That's a recipe for failure.

Be a Tour Guide for Your Audience

Your goal with thought leadership content should not be to appear smarter than everyone else, although it’s nice if people think that. Rather, your focus should be to make everything you write as easy to read as possible.

Why? Because easy reading propels an audience forward, from one sentence to the next, until they understand your point and begin to build rapport and trust with you. If reading is difficult, people will simply stop. That’s especially true on topics such as B2B technology, which can be difficult material anyway.

Think of your mission in writing thought leadership content (such as blog posts, bylined articles, guest posts or social media content) as that of a tour guide through difficult terrain. You are leading readers to meaning via the safest route you can find, with as few roadblocks and stop signs as possible.

And when you lead them to your point, you better have one.

Six Tips for Tightening Up Your Thought Leadership Content

If you’re struggling with these issues as an aspiring thought leader, here are some things you can do to begin the process of translating your writing from business-ese to something that more closely resembles English:

A Preamble—and a Call to Action

Let's conclude with a tribute to 18th-century thought leader (and founding father) Gouverneur Morris, who wrote the preamble to the Constitution.

You remember his words, don't you?

We the human capital of the United States, in order to facilitate a cutting-edge, best-of-breed convergence of revenue-generating entities, actualize Justice, insure scalable domestic Tranquility, provide for the interdependent interfacing of defensive capabilities, promote mutually beneficial functionality in the North American market space, and secure the Blessings of harmonized, re-engineered culture to ourselves and our Posterity, do conceptualize and cultivate this Constitution for the United States of America.

No, that's not what he said. If it were, you and millions of others would have never passed 5th grade. Here are the words you actually had to memorize:

We the People of the United States, in Order to form a more perfect Union, establish Justice, insure domestic Tranquility, provide for the common defence, promote the general Welfare, and secure the Blessings of Liberty to ourselves and our Posterity, do ordain and establish this Constitution for the United States of America.

So let this be the day you toss the fig leaf covering your best ideas. Choose active over passive voice. Write short sentences. Employ vivid imagery. Ditch the acronyms. Avoid the gerunds. Choose better words. And pity the poor reader.

When you’re writing, try to imagine their eyes breezing through your work like a hot knife through butter.

You can do it. Make your brand stand out by standing out yourself—with clear writing that has something to say.

This article expands upon a post by former Grover Mike Drago. 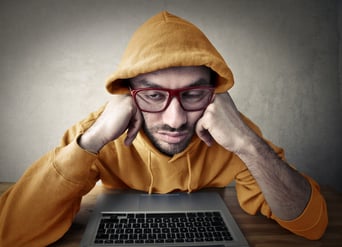